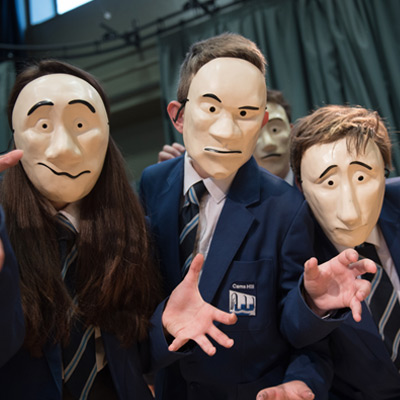 Everybody thinks they know what Drama is, but it is much less about performance than it is about being able to organise and prioritise one’s thoughts when exploring ways of communicating. Drama is also an exciting way to explore issues in a safe environment. And this is especially true for Year 7 pupils who are exploring the school, new relationships with peers and staff at the same moment they have arrived from their different Primary schools and found themselves the smallest and youngest members of the Cams Hill School Community.

Parent of Year 7 girl: “She was really worried about the new tutor group before September but Drama really has helped her settle in.”

Parent of Year 7 girl: “Our daughter is so much more resilient than we thought she would be, there is no doubt Drama has helped her put things into perspective and given her a chance to reflect on her feelings.”

Pupils have one lesson a week of Drama and are taught in mixed ability classes of 30.  The increasing security of learning in the context of the tutor group helps pupils to appropriately push the envelope and try new things.  It is difficult to make mistakes in Drama since some of our best learning experiences happen when things go another way than was expected.

Pupils study a topic for a half term, sometimes a term.  In Year 7 the focus is on group working skills, working with a partner, timing, preparing for a performance and script work. An early key module is a small group exercise entitled ‘The Decorators’ which gives the children a chance to make their own ‘silent movie’ with safe elements of clowning.  In this module children will explore characterisation through movement, the success of comic timing and the processes of rehearsal and preparation.

In preparation for Key Stage 4, pupils’ work in Year 8 will fall into two main categories: a] devising [making up] dramas relative to a theme or stimulus, and b] textual analysis where pupils will study a text.  Pupils focus a little more on the use of scripted material like Macbeth, where small scenes can be explored and considered in terms of the need for communicating impact and atmosphere.  Pupils also begin to develop a variety of characterisation skills that will enrich their presentation work.

In Year 9 the focus is on developing dramas and performance skills.  There is a strong emphasis on physical theatre [a thread which exists through Years 7 – 9] and cooperation.  The preparation for GCSE Drama increases with the introduction of short pieces of project work and the continuation of devising and study of text[s].

Why study Drama GCSE?  Here’s a few points from the OCR website:

“Steve Jobs, founder of Apple, was fond of saying his success was due to his hiring artists and musicians fascinated by technology rather than computer geeks.”

Still not convinced?  Follow this link to read OCR’s ‘Reasons to Study the Arts’:

Here at Cams Hill School we follow the OCR examination board’s specification.  The course is completed over two years and is made up of the following components.

This component builds upon the experiences of Key Stage 3 and explores the world of devising.  It gives pupils the freedom of experimenting with many different styles of performance and gives them the opportunity to further develop characterisation skills.  Pupils will study different performance and rehearsal strategies whilst creating their own piece of drama.  Pupils are given lots of different starting points from which to develop their work; a photograph, a song, a newspaper article, instrumental music, a historical figure, a sculpture.

Pupils are encouraged to consider the whole performance including technical aspects such as lighting, sound and music, costume and set.

Marks are awarded for two final pieces of work; a final performance of their own devised work from a stimulus set by the board and an accompanying portfolio that documents the process that they went through to reach the final product.

In preparation, pupils take part in a mock project before they embark on the real thing.

This section of the course is marked internally which means we can be flexible around the needs of each cohort.

Let’s look at this section back to front.  At the end of this component pupils will perform two extracts from the same play to an external examiner.  This can be in groups but monologues and duologues are also allowed.  The mark that is given on the day will stand and there is no opportunity to improve your mark.  This can sound daunting but read on to see how we prepare for this exam.

Pupils study a text of our choosing; a great opportunity for us to tailor the work to each class.  And this part of the course is nearly 100% practical.  There may be some written tasks to help develop understanding but these are purely to help towards the end product and are not marked.  In order to become outstanding performers that are able to demonstrate skill in characterisation (using voice and movement), communicate with the audience, be consistent in style and form and collaborate effectively with other group members.  It is important that we understand all aspects of a play-text.  To do this, pupils involve themselves in many different tasks such as on and off text activities, hot-seating to investigate character and forum theatre to explore different approaches to the same scene.  All of this means that pupils can pick and choose from the best moments of rehearsal and creation to produce the best possible performance.

And to assure you even further, it may be useful to know that your Drama teachers have a proven track record in this aspect of the GCSE; historically most Cams Hill pupils raise their overall grade by at least one grade just by the thorough preparation and expertise in this area.

And if you enjoy Drama but performing is not your thing you can always take the Performance Support route for Components 1, 2 and 3.  This means you will be attached to a performance group but will focus on a technical aspect of theatre, for example lighting, sound or costume.

This biggest change for Cams Hill School with the commencement of the new style Drama GCSE in 2016 is the introduction of a formal written examination at the end of the course in Year 11 but we are not worried.  In preparation for this we have written brand new schemes of work for Years 7, 8 and 9 that we began teaching in 2015.  As mentioned earlier, these give pupils a taste of what they can expect at GCSE level so they can approach the work with more confidence when they get there.

Section A of this Component requires pupils to study a whole play-text set by the exam board.  Similar to the approach we take in Component 3, pupils will explore this text through highly practical tasks and in-depth discussion with some written tasks at intervals to help solidify their knowledge and understanding.  To gain a complete insight into the text, pupils will explore the text through the eyes of a performer, director and a technician.  They will learn about the style, themes and content of the play and experiment with different ways the text can be interpreted and therefore staged.  Pupils are not allowed a copy of the text in the exam but by studying a play practically and the many opportunities to practice writing under controlled conditions, pupils will not be underprepared.

Section B of this Component is an evaluation of a piece of live theatre.  Over the two year course pupils are expected to attend at least two school trips to see live, professional theatre.  A collective class experience really helps pupils to discuss and make notes in preparation for the exam.  The question pupils will need to answer will vary each year but all aspects of performance evaluation can be covered by thinking about “How effective was the performance of ……?”  From this, pupils make notes on all performance elements, for example characterisation, use of voice and movement, lighting, sound and music, costume and set.  To answer fully, pupils need to analyse what they have seen as well as evaluate it.  Again, pupils will have plenty of practice writing their answers in examination conditions.

Pupils are encouraged to experience as much theatre as possible during both Key Stages.  The more you see, the more ideas you have to put into your own work, the more opportunity you have to develop you own skills and the easier you will find it to talk about what you have seen.

“You can’t use up creativity.  The more you use, the more you have.” – Maya Angelou