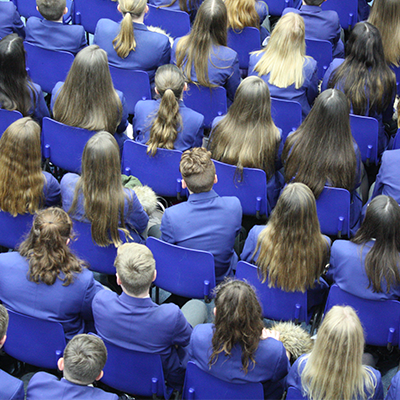 On Tuesday, the school suspended its normal timetable to hold its second Enrichment Day of 2017-18. These days are used to explore aspects of personal development learning in depth and Years 7, 8 and 10 spent time looking at charity, mental health, and sex and relationships education. Year 9 were off-timetable for Holocaust Day, an opportunity to learn about the terrible events during the Holocaust and to listen to a talk from Walter, one of the few remaining Holocaust survivors. Year 11 spent the entire day working with the Science Department, along with some helpful input from the Maths Department to look at how Maths is used in Science. Thank you to all of the staff who spent time preparing a range of interesting resources for this day.

During the week, Year 10 Ambassadors, the Head Girl and the Head Boy delivered assemblies on anti-bullying. These were really well-received. Please see the main bulletin for further details.

Regrettably, there have been a small number of incidents involving mobile phones over the past week. This has led to mobile phones being confiscated for three days in line with the school’s policy. Can we please remind parents/carers and pupils that mobile phones must be switched off and kept out of sight during the school day. Please see the website for the school’s Confiscations Policy.

Finally, we want to make you aware that Ofsted South East region will be hosting a webinar for schools and parents on Wednesday 31st January 2018. Ofsted have identified an increase in cases where on-line access has placed children in danger. Grooming, radicalisation and child sexual exploitation are often perpetrated via the internet and pose a real threat to children of all ages. The webinar also offers guidance to parents about how to help their children stay safe. This webinar will be presented by Hilary Macdonald, Senior Her Majesty’s Inspector, Daniel Lambert, Her Majesty’s Inspector, and Lorin LeFave, founder of the Breck Foundation, whose son, Breck, was groomed and murdered in 2014. The webinar will be hosted at 19:00. You can register for the webinar via: http://bit.ly/OnlineSafetyWebinar

Please see the attached flyer below for more information. The weekly Headteacher’s blog contains more informal reflections from the week and is available here: https://camsheadteacher.wordpress.com/

This week some of our Year 10 Ambassadors, Head Boy and Head Girl delivered an anti-bullying assembly to all pupils in Years 7 to 10.  They gave a clear message that any form of bullying is wrong and asked all of our pupils to be mindful of their own actions towards others.

The national anti-bullying theme for 2017/2018 is ‘All Different, All Equal’ and has the following aims:

As you know the effects of bullying can have a massive impact on all individuals, whether that is at school, work, college or socially.  Bullying is usually defined as repeated behaviour which is intended to hurt someone either emotionally or physically.  It is often aimed at certain people because of their race, religion, gender or sexual orientation or any other aspect such as appearance or disability.  Bullying can take many forms including physical assault, teasing, making threats, name calling, cyber bullying.

There are many myths surrounding bullying issues and some of these myths can often trivialise bullying and suggest the bullied individual is making a big deal out of nothing when actually that is not the case.  This can undermine how a person feels if they are being bullied.  Bullying should not be tolerated in any form.  We believe it is important to address bullying so that the message is clear that bullying is unacceptable.

It is hoped that our pupils left their anti-bullying assembly with the knowledge that any form of bullying is unacceptable and who they should contact if they need to. 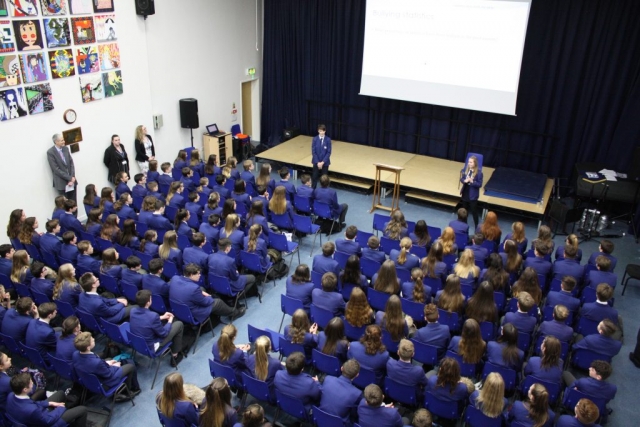 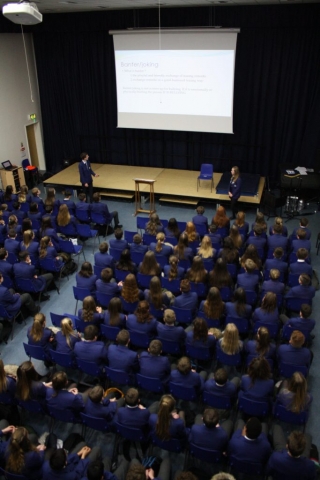 On Thursday the 18th of January, year 7 were granted with an awesome treat: to watch a magical performance of the Frog Prince. In the performance, three extremely talented actors (Dom Phillips, Clive Holland and Anna Harriot) spun a tale that taught us the moral ‘never judge a book by its cover’.

The story was about a princess who needed to learn to care about people for who they are; she was taught this by a frog. The frog had once been a prince; however he was cursed by an evil witch. This curse could only be broken by love. To try and break the curse, the frog stayed in the princess’ castle for three days, in which time the princess grew to love this slimy looking creature. This original script told this story by using some well known fairytales such as Sleeping Beauty and Rapunzel, so therefore this unfamiliar story was relatable and easy to follow.

To add to the enjoyment, the actors used puppets to portray the characters of Rapunzel and the frog. In my opinion the puppetry skills were amazing, especially when they made the frog swim during one of the songs. I think the puppets made the show quite unique, because they added a new dimension to the story as they became human-like through their actions.

Overall, this performance was a brilliant show of singing, dancing and acting skills that encouraged us to be friends with everyone and not just people who are ‘good looking’. I would definitely recommend it to other KS2 and KS3 children.
By Catrin Gibbard, 7C

The Frog Prince was good I would recommend this to 5-7 years of age. The best part of the play was when Mr Murton went up on stage and acted as the magic mirror he was really funny. During the play it did get a little bit boring but then it got better. The doll that played Rapunzel freaked out a lot of people so I think they should replace it. I also liked when one of the actors shot the confetti canon and the confetti landed on me.
By Molly Dyson, 7I

The frog prince is a fun exciting performance that captured the essences of a perfect world class performance. The funny jokes make you laugh till you couldn’t breathe and the catchy songs kept you humming along till the last note. Throughout the play we met many characters like Polly, Henry and the thirsty frog! We were told funny stories new and old (the honest prince, Rapunzel and more) and had are spirits lifted sky high.

Personally I found the best part was when Mr Murton himself showed us his amazing acting skills as he was casted as the magical mirror. Even though he was reluctant he really put on a good show! My favourite story was the first frog as it had funny dance moves and also educated us on the world oceans (always a bonus).

At the end there was a huge roar of applause as all the story’s came to an end and everyone lived happily ever after…But not before we all stood up and danced to a fabulous song.
by Abigail Rawlings, 7C 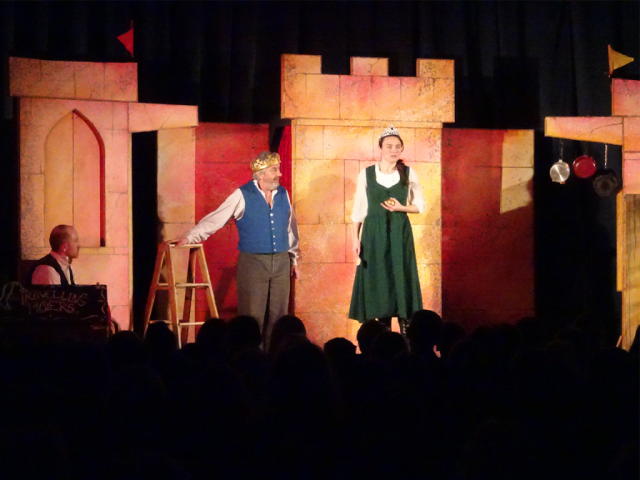 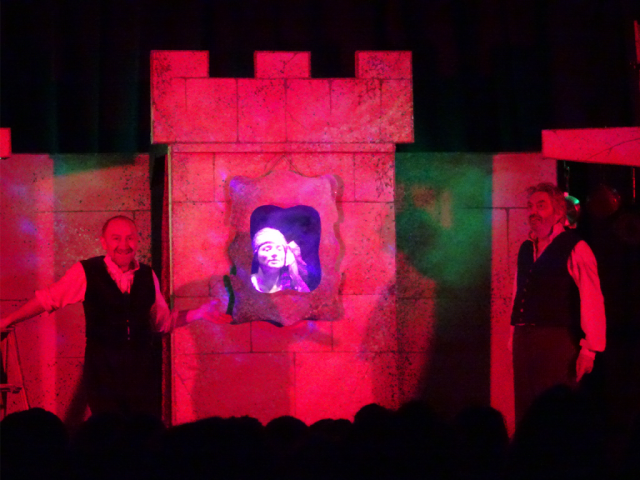 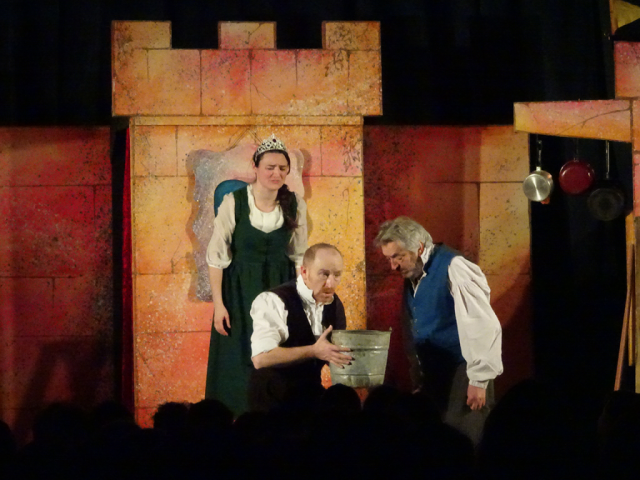 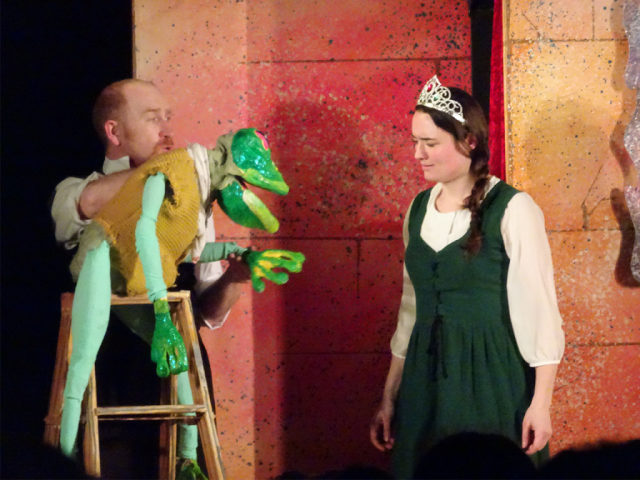 There are no results for this week

From 15 January MEAL DEALS have the option of flavoured water.

From 12 January baguettes will be reduced to 55p (was 60p), but if butter is required the cost will be increased to 65p.

Free school meals must only use the dining hall at lunch time, and have either a MEAL DEAL or MAIN MEAL. If items are not found on the day they are lost, please keep checking with the Medical Room as they can often take a couple of weeks to reach us.

A polite reminder to Parents/Carers please ensure that all pupils property is clearly named with the pupils name and tutor group.

Various keys, watches and pairs of spectacles are kept in the Medical Room when handed into lost property. When named items are handed in to the Medical Room Form Tutors are notified by e-mail or printed slips, which are sent in school registers, to ask pupils to come and collect the items.

You may pay online for the majority of trips at https://www.scopay.com/camshill-hants

Water Sports Trip to the Ardeche – July/August 2018
Fifth instalment of £55.00 due by Wednesday 31 January

Disclaimer: Cams Hill School is not recommending the following services, simply providing information that may be of interest. We cannot vouch for safeguarding, insurance or health and safety aspects of these companies so please access their websites for further information.