We have just three weeks of the Summer Term left before the school closes to pupils for the summer holiday. School will close to pupils at 1230 on Friday 19 July 2019 which is a non-uniform day. We ask pupils to donate £1 to charity to wear their ‘own’ clothes. More information will follow nearer the time.

Do keep an eye on the calendar, which you can access via the website, for all upcoming events. We are on the run-down to the school’s performance of ‘We Will Rock You.’ Preparation and rehearsals are going well and tickets are on sale for the three performances taking place on Wednesday 10 July, Thursday 11 July and Friday 12 July.

Next week, Year 8 head to the Witterings with the Geography Department to take part in fieldwork to support their work in the classroom. At the moment, it’s looking like the weather is in their favour!

A huge well done to Year 10 who have been sitting exams this past fortnight. The invigilating staff have commented on their impeccable conduct, following the rules and doing the best they can as they conclude the first year of their GCSE/Key Stage 4 courses. Exams continue to next week for those taking Art, Photography, and Textiles. Good luck all!

The results for the first week of crisp packet counting for the house bottle top competition were:

Well done to Endeavour! There are going to a lot more boxes around school due to our amazing Cams Hill pupils being so diligent at putting their crisp packets in them (they are filling up very fast).

Don’t forget the bottle tops and battery recycling is still on going and all the boxes for this are in Reception (the Warrior box is looking very full already).

Foodbank donation start on Monday and will run for two weeks. Please help this essential local cause, which directly supports families in this area.

Lastly the Kindness Ambassadors have been invited by Carleen Care Home to join with their residents in watching a steel band and further strengthen their bonds with the residents. Look out for a report on this visit next week.

This was the first year Cams Hill has had a girls’ football team represent the Fareham area at the Hampshire Youth Games and last Friday what a day we had!

We came up against some amazing teams concluding the day with the gold medal position in the Championship.

The Cams Hill girls were brilliant all day; not only were they producing some great football to watch but they conducted themselves impeccably in front of the other schools the entire day. When they weren’t on the pitch, they were racing across an army obstacle course, shooting some arrows in archery and bouncing around on an inflatable slide. 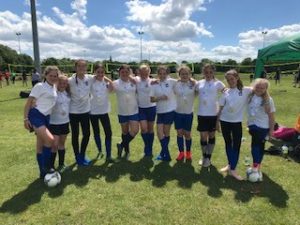 We took four teams to the Hampshire School Games Volleyball Tournament at Aldershot Garrison last Friday. After stepping in at the last minute to help run the tournament on the day, Mr Gunner’s troop were superstars. They oozed respect for each other as well as their opponents, applauding everyone’s efforts along the way.

Cams Hill made it through to the semi-finals and secured a spot in the final. Despite some amazing 3 touch volleyball, with strong spikes, Wavell school got the better of us in the windy conditions winning first place. Second place in Hampshire went to Cams Hill School! Excellent effort, well done boys!

A massive well done to all involved, particularly those who were drafted in last minute, playing against teams predominantly made of Year 8 pupils with heaps of experience under their belts. Many of our Year 7 pupils had their first experience of a volleyball tournament and the smiles on the way home show they have started to forge a path to glory in this exhilarating game. 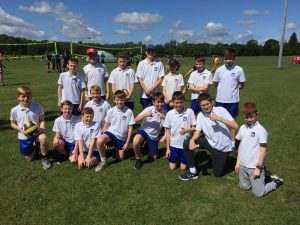 Cams Hill pupils arrived early to the changed venue of the Gosport and Fareham Athletics Championships’ following the meet that was rained-off two weeks ago.

Starting with the field events, the boys team proved exceptional across the events. Standout performances from our pupils in the Triple Jump and in the Javelin, winning those events. A number of pupils will also represent the district team on the 9 July in the 800m, 1500m and in the High Jump for coming 2nd place. The final event of the day proved to be decisive. Cams Hill were unfortunate not to get the result they were after in the relay, finishing first with a disqualification on the final changeover. The boys team finished victorious with 92 points 6 points ahead of the next team.

The girls started on the track, with rocket performances from all members of the team. Standout performances from a number of the pupils in the 100m, 200m, High Jump and Javelin. Members of the Cams Hill team will also represent the district team on 9 July in the Long Jump and Discus for placing 2nd. The girls relay team won their time trail by a clear distance, having to wait patiently for the second race to get underway. Bay House finished first in the second race with a time of 61.41, 0.2 seconds slower than Cams Hill! Unfortunately, Bay House proved too strong overall, finishing with 93 points, 10 ahead of Cams Hill, placing second.

One more event to come for the Cams Hill Athletics Team, as part of the Gosport and Fareham team in the Hampshire Athletics Championships on 9 July. This will round off an excellent year for athletics at Cams Hill.

UNIFORM – FOR YEAR 6 PARENTS ONLY

Skoolkit will be holding a 10% discount week in their Fareham store from Saturday 13th July – Saturday 20th July, where all items listed will be subject to a 10% discount for this time only 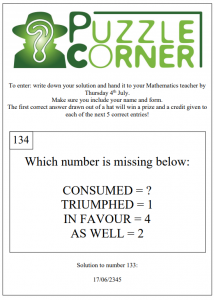 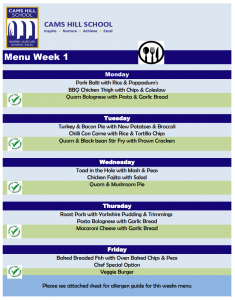