This week has seen a Year 7 visit to the Mary Rose Museum with the History Department and an external speaker visiting the school to give a clear message to all our pupils about keeping safe online. We also welcomed a significant number of Year 5 pupils from local Primary Schools to hear this message with the presentation tailored for each age-group. More information regarding these two events is shared below.

Mrs Harrison-Jones (Headteacher) has delivered an assembly to all year groups this week. As well as welcoming pupils back to school after the Easter break, there was also a reminder about the importance of being ready to learn with uniform and equipment, punctuality to school and to lessons and by applying effort and maintaining a positive attitude. It is the case that most of our pupils demonstrate a good commitment to their learning and to the school community as a whole – our endeavor remains the same, for all members of the community to feel respected, self-improving, proud, confident, happy and positive.

The school had a visit from a nationally renowned e-safety advisor on Monday 29 April. Alan MacKenzie gave talks to Yeas 7-9 on CAPTOLOGY – how advertisers use computers and apps as persuasive technology. He also discussed with Years 7-9 how this can affect wellbeing. All pupils showed interest and reflected on their online use.

The theme for Year 10 was ‘Considerations for their futures’ based mainly on digital footprints, what future employers and colleges look at, identity on line and keeping themselves secure online. Again, this was well received by all.

The feedback from Alan was that he felt our pupils and Year 5 pupils were hugely respectful and pleasure to present to.

The Year 8, 9 and 10 football teams had all progressed through to the cup finals which is an impressive achievement.

The Year 8 team played competitively in the first half and pushed Fareham Academy hard pressing them all over the pitch and taking an early 1-0 lead scored from outside the box. Shortly after another goal was secured making it 2-0 with a finish from the same area into the bottom left hand corner. In the second half the pendulum swung in favour of Fareham Academy who stormed back with 2 goals to quickly level the game. With tired legs on a big pitch Fareham Academy committed more players forward and managed to win the game with two more goals. A game of two halves but entertaining none the less. A great effort from all the players involved who beat Portchester, Bay House, Brookfield and Henry Cort to reach the final. Well done to all.

With swathes of pupils and parents bulking out the stands, the Year 9 team took to the turf.

After hard fought first half, the teams entered the tunnel 0-0. Cams Hill put the pressure on, whipping in a cross resulting in a penalty. With the first goal in from Cams Hill, the players and crowd went wild! Henry Cort took a corner and the ball was bundled in to the net. 1-1.

With minutes to go, the ball flowed end to end with every single player putting their heart and soul into the occasion.  Keepers were tested, defenders put their bodies on the line, but one opening put Henry Cort in a position to secure their comeback. 2-1 Henry Cort.

The boys were a little disappointed, but they should hold their heads up high.

But to make it to a cup final in their first season, going 1-0 up against a team going to represent England in Ireland soon, we should come away confident that next season will be very, very competitive.

Dancing around the defenders at the goal line, our first goal home into the inside of the net was scored. Our second came from a run on the right wing, cutting inside the pitch and curling a left foot shot over the keeper just under the cross bar. Half time, Cams Hill 2-1 Fareham Academy. We conceded a second shortly after the restart. At 2-2, Fareham’s keeper was tested with a spell of attacking play seeing the ball hit the crossbar, another player getting a toe on a cross to hit the post and a few others whistling past the goal. A foul on the edge of the box by three players, resulted in a free kick which put the ball over the wall with too much heat for the keeper, flying off his gloves straight into the back of the net! 3-2 Cams Hill – final score!

100 pupils from Years 7 & 8 took part in the UKMT Junior Maths Challenge on Tuesday.  This may have been the first time many had sat a test in the Exams Hall and yet their conduct throughout the Challenge was superb.  We now have around four weeks to wait for the results to be published.  Well done to all for taking part.

Here are a couple of the questions from the Challenge:

Which of these is closest to 7?

What is the last digit of the smallest positive integer whose digits add to 2019?

Year 7 pupils had the opportunity to experience their local history by visiting the Historic Dockyard at Portsmouth this week with a specific focus on the Mary Rose Museum. Whilst immersed in the historical environment, pupils participated in workshops with Historians including a History Mystery enquiry focused on why the ship sank and investigated the surgery that took place on the ship itself! Lots of fantastic knowledge was acquired by all that will soon be applied in the classroom – it was a brilliant experience. 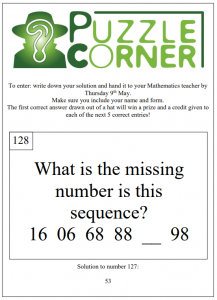