Credit Averages for This Week

As a school community, promoting and supporting the work of charitable organisations is of huge importance to us not only to benefit the charities themselves but to help pupils to appreciate how deeply rewarding this can be too. Our work with charities serves to strengthen pupils’ personal values such as kindness, generosity and the desire to help others.

With events in the Ukraine dominating our news, pupils, families and staff asked if we could help by supporting charities which are either taking aid or providing resources to those in crisis. In recognition of this, on Thursday we invited pupils to come to school in non-school uniform and they could choose to wear an item of blue or yellow clothing. In place of a request for a monetary donation, we encouraged those participating to contribute as a family to a charity of their choice that they believe will make a difference to those in the Ukraine. There was a fantastic response; thank you to all our families.

On 18 March 2022, we will be holding a number of events to raise money for Comic Relief. Parents and carers have been sent a letter with the specific details as well as the details about how we will be supporting local charities later this term.

Please see below the school’s attendance figures for our pupil cohort this past week.  For your reference, it is our intention to share these details with you in all future weekly messages.

Date for the Diary

The ‘Guided Choices Evening’ for parents/carers of pupils in Year 9 is taking place on 22 March 2022 (1630 – 1830). Parents/Carers have been sent a letter with the specific details.

Please refer to the calendar on our website for dates of all forthcoming events and activities.

On the back of storm Eunice, 50 Year 11 pupils and five members of staff made the intrepid journey to a very windy and snowy Iceland.

Pupils had the opportunity to visit the Gulfoss waterfall, the Blue Lagoon and the many geographical features of the island. A visit to the volcano centre allowed pupils to learn about the history of the island in relation to its volcanic activity. They also sampled the local leisure centre and outdoor pools.

We thank the staff involved for the huge amount of work which went into the organisation of the trip which is always a mammoth task not least whilst we make sense of the rules and regulations linked to travel with COVID, and for giving their free time to supervise the pupils on the trip. The pupils were an absolute credit to the school and we hope life-long memories were made. 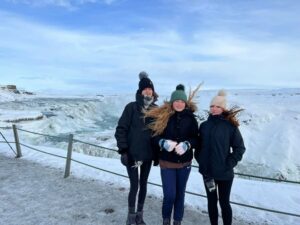 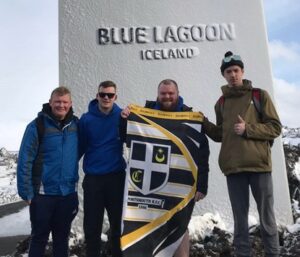 It was with bated breath that the school (well, the Maths Department) waited for the UKMT Maths Challenge results this week.

Due to COVID, the school (pupils in Years 9, 10 and 11), had been robbed of the chance to go head-to-head with their mathematical foes for the past two years but this year was different. With only a pencil and their brain power, last month 114 pupils took up the mathematical challenge of 25 devilish questions, with some questions carrying a penalty for error and over the course of an hour hoped to show themselves worthy, which they all did in spades.

All pupils excelled and of note were the 33 Bronze awards, the 13 Silver awards and the 7 Gold awards. Indeed, nine pupils proved their mettle in the challenge and have qualified for the next round. This is to be completed on 17 March when they will strive for greater mathematical glory beyond …’

The Art Department has been running another seasonal House Challenge this term; designing a Valentine’s Day Card.

This competition was open to all pupils and staff and was a favourite with Art Club (once Miss Hutchings had brought out the tubs of glitter…).

There was a high number of entries from those in Illustrious (83%), five entries from Warrior (12%), two from Endeavour (5%) but sadly the red house, Invincible, haven’t sent any cards this year.

All entries will receive House Points and our five chosen winners will all receive extra house points and a delicious edible prize.

Well done to everyone who entered. 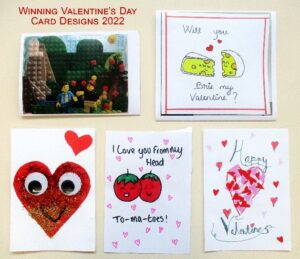 News from the PE Department

Last Friday 9 boys from Year 7, went on an adventure to Perins School in Winchester.

We were up against some big state schools and even some independent schools with the like of Bishops Wordsworth, Salesian College, RGS Guildford and Embley to name a few. We were drawn in a group with Perins (Sky Blue), Weydon and Salesian College. This was going to be a challenge as some of the squad had brought 10-15 players which meant lots of fresh legs to come off the bench but it wasn’t going to stop us from having fun and playing some rugby. 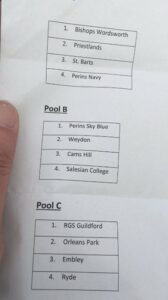 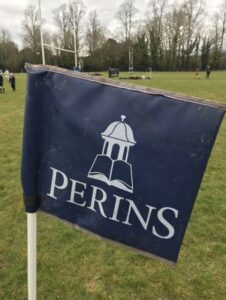 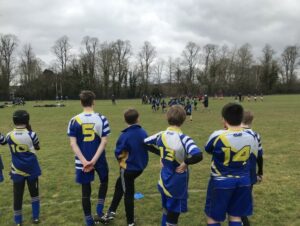 This meant we finished 3rd in our group.

Cams Hill, Perins (Navy) and Embley. Having watched Embley’s last group stage match we knew they would be in a bit of trouble with two injuries and a small squad meant they finished the match borrowing players off another team. This meant they dropped out early and left the shield decider between Cams Hill and Perins.

Shield Match: Cams Hill vs Perins (Navy): As we arrived to the pitch Perins were already there warming up with a large squad. This could have been an issue as we had tired legs and a small squad. We attacked with very fluid lines and tried to pass through the hands to see if we could match the other Perins team. There were two amazing tries which included catching the ball from the kick off, side stepping and weaving between players to score a try both times. It was a great way to finish the day as we won by six tries from a great attacking threat.

Year 7 Rugby training is open to all, regardless of experience. For further information please see either Mr Annison or Mr Worthy.

Our Year 8 rugby team continued their good progress with some outstanding performances at our local school’s tournament. Confidence is still progressing well with all 22 players having now represented Cams Hill. Training continues every Monday after school, open to all. Thank you to all parents/carers who have attended our matches. It is fantastic to have your support and the boys really appreciate the extra encouragement from the touchline!

Badminton club on Tuesdays and Basketball Club on Thursdays continue to run before school from 07.45 to 08.30. These clubs are free of charge and available to all.

Athletics Club will start again on Friday 18 March after school. This club is open to anyone in Years 7, 8 or 9 who is considering representing the school in Athletics next term. For further details please see Mr Worthy.

Puzzle of the Week

Pupils, parents and carers can enter.  To do so, go to:  https://www.puzzleoftheweek.com/home and register.  Pupils need to use their school email address.  You will be sent a User Code to submit your answer each week.  There were 12 correct entries to the circle problem last week.  The correct answer was 30 intersections. 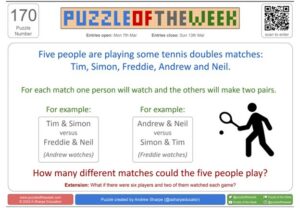 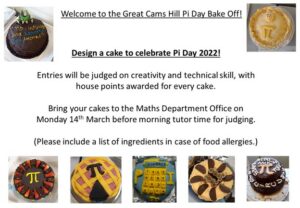 Cams Hill School are supporting the Acts of Kindness Easter Egg Collection. The principle is that no child in the local area should go without an Egg over Easter. We would love to collect as many eggs as possible for the charity and help those really feeling the financial pressure. The collection point is based in Main Reception. 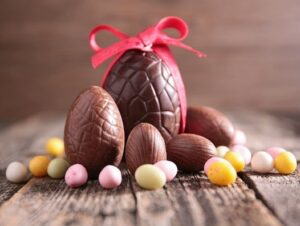 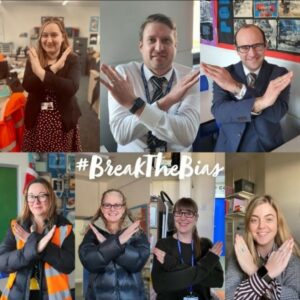 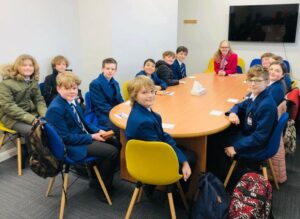 This week, Mrs Harrison-Jones had the pleasure of meeting our Litter Heroes. Since September, these pupils have helped during lunch time to keep our site looking tidy and litter free. We have been so proud of their commitment and energy and wanted to relay our thanks. They are definitely #LitterHeroes. If any pupils want to join our increasing crew of litter warriors, please come and find Miss Noble in the Canteen. There’s a litter picker waiting to be taken!